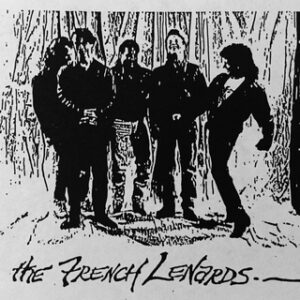 A big part of this project is researching and listening to the music released by NE Ohio bands from 1985 to 2000.  Deep in the Jim Benson Archives, I found three French Lenards cassettes:  what appears to be an early promo release, a full length album titled "After Saturday Night," from 1987 and an EP, "Relations" from 1989.  Maybe it's the thirty year gap since I last heard the band, but after listening multiple times, the French Lenards are certainly one of the best NE Ohio bands in the late 80's and rate up there with The Adults, The Mice, In Fear of Roses and Terrible Parade in respect to the quality of songs.

The band was the musical vehicle primarily for Tom Jares who played guitar in the final version of the legendary Wild Giraffes.  The influences are widespread - new wave, soul music, old time rock and roll and a little jazz, too.  And, as with the above named other bands, Tom's voice is unique giving the songs their own character.  Oh, and the band rocked their live shows making them an incredibly popular draw.  The core of the band consisted of Jares, sax player, Michael Scherma and drummer, Jerry Gaviak.  Guitarist Jeffrey "Hal" Cope who appeared on "Relations" would later surface with Jares in the avant garde/acid jazz group Coltrane Wreck in the mid 1990s.  The French Lenard's song, "Like A Wrecking Ball" appeared on the Jim Clevo Presents compilation, "Clearing The Air" in 1991 which was the band's swan song, however, Jares, Scherma and Gaviak reunited in 2017 with Jares' stepson, Skylar Keffer on bass and performed an almost two hour French Lenards show at The Symposium.  They released a album of brand new songs in 2020 and continue to play live.