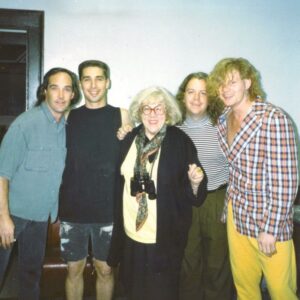 Steve Henry grew up in Dover, Ohio, a city along the now long defunct Ohio & Erie Canal in Tuscarawas County, Ohio. Dover is located approximately 82 miles south of Cleveland and most of its notable people (according to Wikipedia) are old-time Major League baseball players, golden age NFL players and mathematicians. Quaint and historical, in the 1980s, Dover was no rock and roll Mecca, and so, in 1986, a young Steve Henry took his guitar and traveled up Interstate 77 to Cleveland. As most musicians did back in the day, Henry put an add in Scene looking for a guitarist, bassist and drummer to form a band.

The ad was fruitful. First, Steve met Middleburg Heights native and guitarist/vocalist, Don Owens and the two began working on a batch of original songs. Shortly thereafter, Henry and Owens found bassist, Mark Simpson, a Case Western Reserve University student who hailed from Washington DC. Finding a drummer was slightly more difficult, but the new band eventually hooked up with Doyle Rice, a Connecticut transplant who, according to Steve, may also have been a Case Western student. Band members? Check. Songs? Check. Name? Well, Henry decided to keep it simple yet mysterious. If Pink Floyd was named after two old blues musicians and Lynyrd Skynyrd was named after a hated gym teacher, well then this band would be named after one of Steve Henry's high school friends and thus, the Earl Rays were christened in early 1987.

The late 1980's were a great time to start a band in NE Ohio and the Earl Rays easily found gigs, however, almost immediately after taking off, Doyle Rice was out, replaced by Berea native, Jeff Craig. In late summer of 1987, Don Owens and the the Earl Rays split over differences about the direction of the band. According to Don:

"I was heavy into what would become the No Depression genre (at the time James McMurtry, Long Ryders, etc) and Springsteen. Steve was more of an REM, Replacements guy at the time. Eventually these two styles weren't compatible and I left the band."

Don would go on to form and front another legendary Cleveland band, the Outcasts. Another trip to the well of musicians that was the Scene classified produced Owens' replacement, Library, PA's Bernie Jungle who was hired after what Henry describes as "an awesome audition."

After the arrival of Jungle, the band quickly recorded and released a three song promotional cassette. Their first single, "Smile" off of that cassette release was recorded at the Kopperhead Studios in North Canton, OH (still a working recording facility) as a result of a contest win. Club gigs brought opportunities to open for national acts - in 1987, the band opened for the Stray Cats in Cleveland (I would have loved to see THAT show) and in 1988, the Earl Rays were offered an opening slot for Adrian Belew and the Bears. Mark Simpson was not available due to a last minute school conflict and Holy Cows' bassist, Paul Kompier, filled in for the missing Simpson. Of course the inevitable occurred - the competition to open for national acts in Cleveland was cutthroat and so, Simpson was out of the band. Back to the Scene classifieds went the band, and yet again, they found their missing piece in late 1988 or early 1989, this time in former Wombats bassist, Tim Ratley AKA Rex Knots, from Lakewood. The classic Earl Rays lineup was now complete.

From 1987 to 1992, the Earl Rays found a dedicated following in Northeast Ohio, pairing with other popular bands of that time such as Max Crucial and the Krushers, Scruffy the Cat, the Holy Cows and the French Lenards. The band also decided to take the show on the road nationally from Chicago to New York with a gig at the storied CBGB's in New York City in February 1989. Drummer Jeff Craig told me that while he doesn't really remember the CBGB's gig:

"We played a bar in Brooklyn called Lauderbauch's (sp). It was about as big as your kitchen. And after the show, we did an encore and I went Keith Moon on my drum set and destroyed them all over the stage. I think we scared half the front row. It was a great gig."

Craig cited his favorite Earl Rays gig as one that took place in the early 1990's at Cedars in Youngstown, one of the bands favorite venues. Called the "Living Room Set," prior to the gig, the band garbage picked enough furniture to create an entire living room on stage. The band then invited the audience to hang out on the furniture during their set.

The band also released a number of cassettes and appeared on several local compilation albums including both Exhibit B and Exhibit C released by Play Records, Rockin' U: The Class of 1987 released by Kopperhead Productions (an arm of Kopperhead Studios) and Clearing the Air from Jim Clevo Presentations. Nationally, the band appeared on Certain Damage! Volume 24 (1989) from the College Music Journal compilation series (the Earl Rays' "World for Tomorrow" was sandwiched between tracks from Transvision Vamp and MC Lyte).

Even with all of the positive exposure, after almost five years of writing, recording and playing, the Earl Rays wore out. According to Steve Henry, "in 1992 I was fired, or you could say Bernie quit first, then Jeff and Tim! They rehearsed a few times but I don’t think they ever played out." Steve Henry wasn't finished with the Earl Rays, though. In late 1992, Henry and Rex Knots started working together again. Knots contacted his former Wombats bandmate, drummer Tom Edwards and went out as a trio for about a year as a fourth version of the Earl Rays. They recorded eight songs with Bill Korecky at Mars Studios but it wasn't enough to sustain this renewed run and the legend of the Earl Rays slipped fondly into the ether of the Northeast Ohio music scene sustained by the music and the memory of one of the most creative PR devices ever conceived - the Earl Rays urinal screen which could be found for years in many local men's room across the Eastern United States...or at least in Ohio.

Steve Henry and Rex Knots have continued to play music together on and off since the Earl Rays splintered. In the late 1990's, they formed Hadji's Fruitbasket with drummer Will Jones. That band recorded ten songs before disbanding shortly after 9-11 in 2001. Along with drummer Jason Giaco, Steve and Rex currently play as Balloon Knot, a three-piece punk pop band that gigged regularly prior to COVID-19. Bernie Jungle moved west to northern California and continued his musical journey as a solo singer/songwriter, a member of the band Warm Wires and the duo the Great Auk which partners him with musician Carrie Bradley (The Breeders, 100 Watt Smile). They released their debut, Paradox in 2017. Jeff Craig became (in his words) a "hired gun" helping those who needed him but he eventually began buying more guitars and less drums. The current whereabouts of Mark Simpson and Doyle Rice are unknown. I think, though, it's time for an Earl Rays reunion. I'll find a couple of couches for the stage.