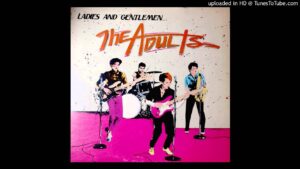 “I saw Raven Slaughter at this annual outdoor summer music festival in Lodi. I remember thinking as I watched them, ‘Man, they need another guitar player’ because there was just three of them at the time. I went up to Raven after the show and told him as much. He asked me if I had anyone in mind and I said, ‘I play guitar.’ He asked, ‘Well, how good are you?’ I said, ‘I’m better than you’ which of course was crazy. But I ended up in the band.” (1)

Michael stayed with Raven Slaughter for about a year and then left in late 1979 to form his own band, eventually settling on his former Raven Slaughter band mate, Robb Harpy on drums, Michael’s girlfriend, Crystal Gray on bass and Marianne Schiebli on saxophone and they christened themselves The Adults. The band’s originals were a mix of tight knit, funky rock, jazz and pop sounds, not quite punk, not quite new wave but totally unique and accessible.

The Adults played with several classic 1980’s classic Northeast Ohio bands including the Generators, the Pony Boys, Lucky Pierre, Wild Giraffes, the Action and Hammer Damage to name a few as well as played gigs outside of their home area. Trips to Columbus, Cincinnati, Detroit, Erie and Buffalo were necessary for an all-original band to financially survive. By 1983 the band was ready to record and through the generosity of a fan who financed it, the Adults recorded Ladies and Gentlemen…the Adults. Released in 1984, one track “Junk Funk” featured the guitar work of Adrian Belew, guitarist with the Bears and King Crimson after Belew and his friend, record producer Gary Platt, caught an Adults show at the Jockey Club in Covington, Kentucky while the band was recording the album across the Ohio River at the Fifth Floor in Cincinnati.

The 1200 copies of Ladies and Gentlemen sold out. The Adults placed cuts on two Play Records compilations: 1985’s Exhibit A with “Stupid in Love” and 1988’s Exhibit C with “Yes I Do” (a new song that did not appear on their album) and the band continued to play their regular clubs and write new songs. But something was happening to the club scene at the end of the 1980’s. As Paul Michael related to Deanna Adams.

“There came a whole new generation with the mosh pits where they all get in a circle and basically hurt each other. And I had no interest in playing before an audience that expected me to spit water at them and such. That’s not why I write music. I want to see people dance and have fun so I decided to continue but on my own terms.” (2)

Marianne Schiebli left the band in 1985 and you can currently find her playing sax in the Rainy Day Saints. Robb Harpy drifted in and out until 1988 and Crystal Gray called in quits in 1995. Michael remained true to his vision, adding former Serious Nature drummer Tim Caskey, sax player/keyboardist David Guthrie and bassist Brian Dossa. This version of the Adults headed to Nashville in 1996 to record the band’s second album. Playing A Kids Game. Even with the push of a new album, albeit 12 years after their debut and a short return to the road, the Adults called it quits in 1997.

In 2002, Michael, Gray and Schiebli reunited with a fill-in drummer and second horn player for a short set during Edgarfest, the tribute to the late Wild Giraffes guitarist Edgar Reynolds. This marked, I believe, the final appearance of the Adults. The Adults were one of the bands I missed out on so I was fortunate that Jim Benson has a copy of Ladies and Gentlemen in his archives. I loved the songs so much, I went out and found a copy for myself and the first song I played on the very first Listen Project podcast was “Let’s Go,” the track that kicks off Ladies and Gentlemen (very appropriate I thought). The real legacy of the Adults is in their live performances and anyone I’ve ever talked to who saw the band live says the Adults gave it all and held nothing back. Fortunately, a 1981 live show at Kent State University capturing the band in its infancy is posted at YouTube and is well worth checking out.

I recently learned that there are tapes of several Adults live shows out there and I passed the information on to second line-up member Tim Caskey who has become the keeper of all things Adults. Hopefully, the material will see the light of day soon. Paul Michael has been suffering some health issues recently. Tim has told Paul about the Listen Project so in the chance that Paul sees this post, please leave him a message in the comments.